Configuring the http example that connects to ZitiMobileEdge client

Here is the vision… I want to setup the http example… and then connect to it using the ZitiMobileEdge app on my mobile.

This way… I can uncover what I don’t understand in more detail… and reduce the chances of making a stupid mistake… it also helps me improve the accuracy of what I am doing. It was pretty scattered initially…

I have already tested the installation of the controller with the reflect example.

I learnt this the hard way

lots of pain here if you dont do this

I left this last as you have 5 min to enrol…

Once created… download the jwt to my machine, email it to my phone and paste into the ZitiMobileEdge application

I want to setup the http example

My favorite http example to start with is super easy. It just changes the resolved IP address. There’s a bunch of ways to do this but I start out by visiting “eth0.me”. Without OpenZiti you get your default ip address. But once you make the proper service, with OpenZiti you get the ip of whatever machine has terminated the actual traffic. That’s a simple one to start with. It’s also easiest to start with “tunneling app to tunneling app”. So let’s start there too. We’ll start with browser on mac/windows first using a Ziti Desktop Edge, then we’ll add a new identity - a mobile device.

FWIW - If you setup the ZAC (ziti admin console) you can just use your phone to scan the QR code. Which I see now the icon isn’t showing up in the ZAC. Where this red arrow points is actually a clickable link. (a bug we need to fix)

I’ll try to find some time, late today my time or early tomorrow to tidy this up into a little package for you.

This is the example

Ziti SDK for Golang. Contribute to openziti/sdk-golang development by creating an account on GitHub.

PS… given you comments re the app… I am assuming that the ip of the controller is embedded in the jwt file
is this correct?

Oh - ok excellent. I’ll use that as input to the video showing how I’d do it. the ip of the controller - technically the DNS name more likely is indeed baked into the jwt - which is also a cryptographically signed document by the controller. The other post you have shows my controller dns name in the document after being parsed.

Ok I’ve had a moment to prepare some screen caps/steps for you. Here’s how you do it…

Create the ONE config needed

You will only need an"intercept.v1" config for this - since you are using the golang sdk and “listening” on the ziti overlay network, you are NOT offloading traffic at your server. This means you only need “trust” inside your application - that’s amazing! Since you’re using a tunneling app at the client side, you will need the “intercept.v1” config. Let’s make that config now:

Now let’s inspect what we’re saying here. We’re telling the overlay that you want a config, named golanghttp-intercept.v1 which is of type intercept.v1 that will allow a tunneling client to get a private DNS intercept named “golanghttp.zitified” on their device and we’ll allow a port range (i did that for fun) of ports 1234 through 2345

Here we are instructing ziti to make a new service called “golanghttp” and to use the one config we just made “golanghttp-intercept.v1”

You have already enrolled an identity that you want to ‘be the server’. Now you need to authorize the identity to ‘bind’ that service using a serivce-policy:

We are telling ziti to make a service-policy named “golanghttp-bind-policy” of type “Bind” and authorizing ONLY the identity with the name “http.server.identity” to bind the services with the name “golanghttp”

Authorize the “clients” to Dial this service

Now we want to make it so identities can access this service. We do that by making a ‘dial’ service-policy:

We’re telling ziti to make a service policy named “golanghttp-dial-policy” of type “Dial”. Allowing any identity which has the role of “http-clients” to dial the specific service named “golanghttp”

That’s right - we don’t want to have to update this policy everytime a new identity wants access. That’d be horrible. So here we have used a ROLE instead. A role is an attribute added to an identity. Your mobile identity probably doesn’t have this role yet - let’s add it:

Yep. Assuming your mobile identity was already enrolled - by the time you read this you’ll probably notice a new service shows up on your device… Here’s what it looked like on my mobile when i did it: 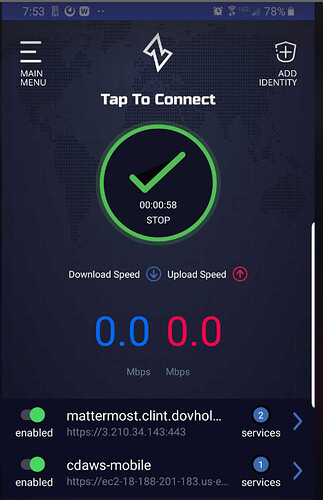 You can see I now have a “cdaws-mobile” identity and it has access to one service. Now I can go to my browser and go to: http://httpserver.zitified:1234/add?a=4&b=7 and get a response from the zitified server in my tunneling app… 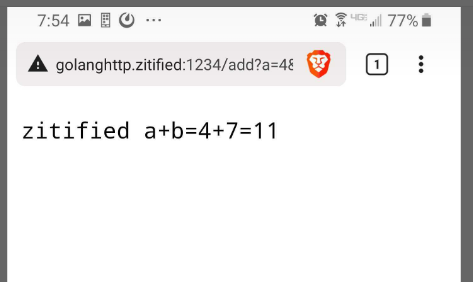 And that’s all there is to it… Since this is a discourse post - not a actual writeup, i might have messed up a step here or there or glossed over something - but I think I got all the steps correct.

You should be able to replicate the same… And next time you make an identity - since we used that roleAttribute idea - you can just make the identity with the attribute predefined and give that identity access to the same http server. Like this:

That identity now will be authorized to use the http server you setup. neat stuff - right???

Awesome… the explanation really help… and it is very cool.

will update when I work through it all

I am working through this and noticed two things

I have since deleted this… though… would it make any difference?

#2… the service policies did not have a service-role

what is the purpose of the service-roles.
what is the difference between identity-roles

how do you create a new role

It appears that roles are automatically created… ie… as you add a tag… its added to the list of roles available.

ok… got the difference now

the service policy maps the identity to a service

ziti dial failed: operation did not complete in time.

I dont know if this was related to the issue with getting the “green” light on the tunneller… but that bit is working now.

However… when I go to the following URL… nothing happens

What else can I do to debug this… and narrow down where the problem is?

if this is the problem… what do I need to do to fix it… as I don;t really know how this happened…

maybe I need to just start from a fresh start again

This is a pretty clear indicator that the identity has no edge routers available. Don’t start fresh - we can fix this

This is a case where you want to run that policy-advisor again:

If you do that - i expect it’ll tell you the mobile identity doesn’t have any edge routers assigned.

Then find your identity and make sure it matches a policy:

Notice that i have a policy saying: ANY edge router with the attribute of “public” is available for any identity with the #all attribute. (#all is special - it means any/every/all)

Is there anything else I can check?

Maybe this is where I am going wrong

Should the server identity have the same attribute as the client?

I thought to include a list of the service policies also

ahh. ok… maybe I need to add @httpz to the edge router policy…

When you turn the server identity on, the mobile client still won’t connect, correct? Would you be willing to send your mobile’s logs to help at openziti.org?